Well the holiday season is once again upon us. And as usual, I’m ashamedly not nearly as full of good cheer as I feel like I should be. Believe it or not, I don’t like being a grumpy Grinch-like asshole every Christmas. But the holiday season is almost always way more stressful to me than its worth. I say it every single year, but Christmas is just Thanksgiving with the additional unnecessary stress of excessive consumerism.

And this year’s season of spending seems even more frustrating because instead of focusing my attention on twinkling lights and shiny paper, I’m exhausting myself battling the most persistent bout of strep throat I’ve ever had, which means I’ve spent the last six weeks doping my entire body with antibiotics just to (so far) unsuccessfully kill an infection that’s only in my throat.

I swear the streptococcal infection loves me more than any woman ever has. And, like any self-respecting stalker, it refuses to go away quietly. As a result of this long term dysfunctional relationship, I was sick through most of my marathon tapering, I’ve been consistently more fatigued both prior to and since that race, due to that weariness I’ve been unable to maintain my run/workout routines as I’d like, I’m obviously not enjoying the therapeutic release that those workouts would normally provide, and because of the antibiotics’ negative effects on my digestive system, I’m also not absorbing food nutrients as efficiently and therefore not recovering from workouts as well as I normally would. Basically, I just cannot wait to get these drugs out of my system so that I can stop medicating and start healing.

I can’t run. And it’s seriously driving me crazy.

When I was prescribed my third, much stronger antibiotic my doctor said that it may cause some tightness in my joints and tendons. He was right. I ran a few times after starting the new scrip and I felt good. Then after last Saturday’s 12 miles, my left achilles tendon started to feel a little tight. No worries. It wasn’t to the point of being painful or anything. I thought it was fairly normal soreness associated with being so sick and not running very much that week. But when I tried to run on Tuesday, it hurt. It hurt enough that I stopped after a whopping one mile. I rested it, stretched it, and on Thursday tried again. It still hurt. So I stopped again, only sooner. I didn’t even try to run today. It sucks.

Not sure what I’m going to do next week. Other than my ankle, my body feels good. And I want to run so bad that it’s killing me. But I’m still on meds and I really don’t want to injure myself just because I’m too stupid to listen to by drugged up body. Ugh, I hate to have to say it, but I’m slowly accepting that I may not be able to run again until I can get this poison out of my system and let my body get back to its normal functioning capacity for healing and recovery. Have I mentioned how much this sucks? Well it does. A LOT!

“Push yourself again and again. Don’t give an inch until the final buzzer sounds.” – Larry Bird

Throughout the last month and a half of dealing with my old friend, Strep, and griping about my inability to maintain my normal exercise routines, I’ve received similar advice from many of my friends.

“Give yourself a break Man.”

While I am 100% sure that every one of those sentiments was shared out of genuine concern and with the best intentions, I don’t think everyone fully appreciates how conflicting those things can be for me.

I’ve spent my entire life never pushing myself, taking the easiest way out of every single situation, and ultimately ended up unsatisfied with the results. Deciding to push myself and to expand the boundaries of what I incorrectly thought possible has been the key to moving beyond a past existence that I don’t miss. And I believe continuing to do so is the only way of ever becoming my most authentic self and to get where I’m supposed to be.

Now, I know that my friends aren’t asking me to stop running or to give up any of my healthier lifestyle choices. They just want me to feel better. But I have such an addict’s view of my past sedentary lifestyle that I have trouble balancing the risks of battling through hardship with the opposite risks of sliding back into a way of life where mediocrity was good enough. It isn’t.

I see thoughts like “Go ahead, skipping one workout won’t kill you” in much the same way that I imagine recovering addicts might view “C’mon, one drink won’t hurt.” I know that might sound ridiculous, but I’ve got first hand experience with how easy it is to break healthy habits. And even while I fully recognize that I’m a much different person now, I still cannot stomach the idea of letting myself give up a single inch to that lazy fuck that I know is still inside me somewhere. I won’t do it. I’ve got way too much I still want to do and time is constantly running out.

“We must walk consciously only part way toward our goal and then leap in the dark to our success.” – Henry David Thoreau

The day after I got back from running the Philadelphia marathon, I immediately sat down at my computer, opened up my Philly training schedule, deleted all of the time/pace recordings, and renamed the file “Shamrock Training.”

I haven’t registered for the Shamrock Marathon yet. But I technically started that new training cycle the week after Philly. Unfortunately, my body is not cooperating. If it was just my ankle, I’d be okay. I know I have time to recover from that. But because I’m having such a hard time clearing this infection and my tonsil is still swollen, my doctor has not yet ruled out the possibility of taking my tonsils out; a surgery that could have me out of commission from several weeks up to a month AND of course taking even more antibiotics with additional drugs for the supposedly excruciating pain. I hate even the idea of putting all of these foreign chemicals in my body. Shit, I won’t even take Tylenol.

I was, and am, happy with my time from my first marathon, but I’m certain that I can do better and I still have every intention of doing so in March.

And now I can’t fucking run.

“The best way to find yourself is to lose yourself in the service of others.” – Mahatma Gandhi

I was completely pissed and somewhat lost without my favorite crutch this week. What am I supposed to do with myself if I can’t run? The answer came in an email a few days ago.

One of the other things I did not long after getting back from Philly was to sign up to volunteer at a 50K race being held next weekend. I’d actually considered running it, but after running my first marathon I decided that I had pushed myself enough for this year and that if I couldn’t run it, I would volunteer to work it instead. And a few days ago, as I was becoming increasingly aggravated with my foot, my throat, and my inability to get my body back on track, I got the email with my volunteer assignment. I was actually pretty stoked. I’ll be working one of the aid stations.

I’ve never volunteered at a race before so I’ve obviously never worked an aid station either. But I’m excited to see a race from the other side of the equation. And I’m really happy to be able to help execute a race that some of my friends are running. I’m expecting to have a good time. And without sounding like a total shithead, I suspect that cheering for and supporting my fellow runners as I hand them cups of water or just pick up the crumpled empties that they leave behind will feel significantly more rewarding to me this holiday season than anything I could possibly do at a shopping mall.

I might not be able to run. But I can still volun-cheer. And I think that might be as close to Christmas cheer as I’m capable of this year. Merry Christmas, happy holidays, or whatever else makes your lights twinkle. Have fun. Happy Saturday. 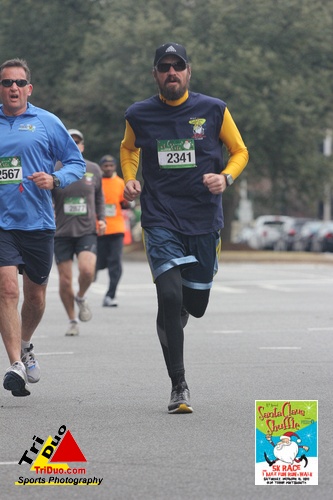